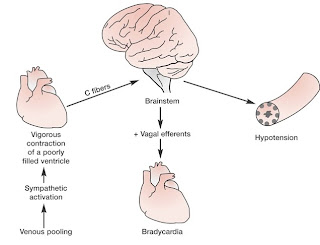 This intriguing set of clinical signs was discovered by von Bezold and Hirt in 1867 – they found that injection of a veratrum alkaloid caused bradycardia, hypotension and apnea.

In the 1930’s Jarisch and Richter were performing similar experiments in cats to see what effect interruption of the cardiac branches of the vagus nerves would have. They were able to prove that the hypotensive effect described by von Bezold was reflex in origin. Many years later, Dawes was able to prove that the reflex apnoea occurred by a separate mechanism to the haemodynamic changes.
Today the Bezold-Jarisch reflex (BJR) refers to the discoveries of Dawes in 1947 and describes the triad of bradycardia, hypotension and vasodilation that occurs upon stimulation of cardiac receptors.
So, how does all this relate to nephrology? Well, this reflex is an important entity to be aware of when in the haemodialysis unit. To understand why, we need to delve a little bit further into the physiology of the reflex.
Mechanosensitive and chemosensitive receptors in the walls of the ventricles send afferent fibres through the vagus nerve to the vasomotor centres of the brainstem. The basal output from the vasomotor centre is mainly sympathetic, which keeps vessels partially constricted, thereby maintaining blood pressure – this is known as vasomotor tone. The afferent fibres of the BJR have a tonic inhibitory effect on the vasomotor centre, but have a very low rate of basal firing. Upon stimulation, they cause profound inhibition of the vasomotor centre, resulting in decreased sympathetic outflow, bradycardia, hypotension and vasodilation.
Now think of the haemodialysis patient who is 4 or 5 Kg up from their estimated dry weight. As we try to ultrafiltrate the patient, if the rate of fluid removal is greater than their rate of vascular refilling, then there may be trouble ahead. As early hypovolaemia develops, the baroreceptor reflex kicks in and simultaneously the BJR fibres decrease firing – the result is increased sympathetic outflow, increased heart rate and initially, preservation of blood pressure. However, as hypovolaemia becomes more severe, the ventricles contract more vigorously around a poorly filled LV cavity – this is thought to allow the BJR fibres to become paradoxically more active. At this stage the BJR overrides the baroreceptor reflex, causing vasomotor inhibition and the resulting bradycardia, hypotension and vasodilation.
Overall the BJR is felt to be cardioprotective – by causing bradycardia and afterload reduction via peripheral vasodilation, the workload of the heart is reduced and hopefully ischaemia is avoided. See here and here for more information.
I think this is an interesting physiological principle to be aware of in the dialysis unit, where the prevalence of LVH and multiple cardiovascular risk factors is so common. We must closely watch the heart rate and blood pressure during the treatment. Often, tachycardia precedes the precipitous drop in blood pressure – therefore those patients may need closer monitoring and titration of the UF rate.
Finnian McCausland physical exam renal physiology
Previous Post

Windows to the Soul…and the Vasculature