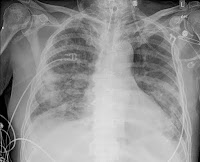 While performing an electronic chart biopsy prior to examining a consult patient, I noticed a “nephrologic no-no,” which can be seen on the patient’s chest x-ray coursing under the right clavicle (see image). This finding was confirmed on my physical examination. The surgical team decided intra-operatively that the patient might need dialytic intervention so a right subclavian temporary dialysis catheter was placed. I had never seen one before, but I am sure many nephrologists who are no longer junior woodchucks like myself were around when subclavian dialysis catheter use was common. As my co-fellow Dr. McMahon pointed out in a previous post, the subclavian route was popular until an association was noticed between this route and subclavian thrombosis and stenosis. Ted Steinman, one of our attendings at The Brigham, co-wrote a paper this year entitled, “Dialysis at a crossroads: 50 years later.” In it, he and other pillars of nephrology propose a new path for dialysis therapy, and this is worth a read. One component of this path recommends changing the mantra “Fistula First” to “Catheter Last” given the unexplained augmented use of catheters and increased catheter-associated infections during the fistula first initiative. In other words, catheters should be the “last” choice for dialysis intiation given all of the complications caused by their use compared to grafts and fistulae. Furthermore, fistulae are not always attainable and cannot always be created in a timely fashion; thus, a graft is the next best thing and a very suitable alternative. The authors also propose that the Center for Medicare and Medicaid Services should consider catheter use to be sub-standard care. The overall premise behind the “Catheter Last” remains roughly the same, but this is an interesting way to think about our patients who are nearing the need for dialytic intervention that may motivate us more to prevent use of the dreaded catheter, especially when a subclavian one slips through the cracks.Posted by Will Pendergraft

New to the Blogosphere: The Kidney Doctor