0 2696 0
Read Later Share
Over at eAJKD, Swapnil Hiremath has a nice post about the potential for SGLT-2 inhibitors to prevent diabetic nephropathy based on a review article published on the topic in AJKD. Essentially the theory is that increased serum glucose levels leads to an increase in the filtered load of glucose. This is reabsorbed in the proximal tubule along with sodium and chloride. This leads to a reduction in the load of NaCl delivered to the macula densa. The kidney senses this as a low effective circulating volume state leading to afferent renal vasodilation and an increase in GFR.

The advent of SGLT2 inhibitors has allowed us to test this theory in both animal models and humans. Recently, a small physiologic study was published in Circulation which tested the effect of SGLT2 inhibition in individuals with type 1 DM stratified by the presence or absence of hyperfiltration at baseline. GFR was measured using inulin clearance. The figure above is taken from the paper and shows the putative mechanism for hyperfiltration and the role of SGLT2 inhibitors. In this paper. empaglifozin treatment for 8 weeks lead to a significant decrease in weight, BMI, daily insulin dose and carbohydrate intake in both groups. In the normofiltration group, it had no effect on renal hemodynamics. However, in the hyperfiltration group, there was a significant reduction in GFR (-33ml/min), renal plasma flow, renal blood flow and an increase in renal vascular resistance. These results are remarkable but to me it does beg a question.Why is there such a dramatic effect in the hyperfiltration patients and what makes them different in the first place. Based on the evidence of this study, most of the hyperfiltration is indeed related to increased TGF. Looking at table 1 gives a hint of what might be the correct answer. 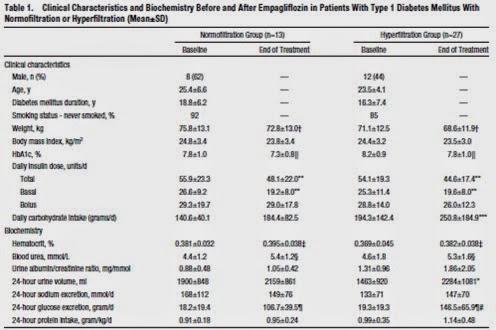 I should point out that this is my theory alone based on the reading of this paper and that many of these between group differences were not statistically significant because of the low numbers of patients involved. Still, this paper at least provides elegant proof of the role of proximal glucose reabsorption on the maintenance of hyperfiltration.

The use of IVIg in Kidney Disease