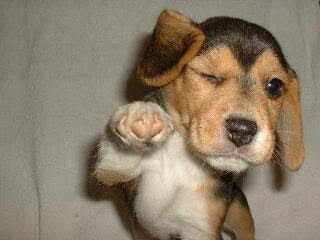 I’m sure many of you have a pet dog. Well, as Rover quietly licks himself in the corner, few would believe that he may hold the key to unlocking the genetic secrets of human disease, as suggested by this fascinating article in this weeks Nature Genetics.

Dogs evolved from the wolf about 15,000 years ago and, as a result of plenty of random mating over that time period, developed a ‘short-range’ haplotype structure due to genetic recombination. This resulted in lots of genetic diversity, with a wide variety of genetic mutations occurring at a low frequency across the species.
People only began breeding pedigree dogs in the past 200 years or so, whereby animals with desirable physical or behavioral traits were paired. This was effectively an extreme genetic experiment, which concentrated a fraction of the population genetic variation within a single pedigree, resulting in the 400 or so unique breeds we know today. Unbeknown to dog breeders, as well as collecting favorable polymorphisms for physical traits, these dogs were also silently accumulating disease-causing genetic mutations of strong effect due to genetic ‘hitch-hiking’. Pedigree dogs demonstrate exceptionally high prevalence rates of complex disease within breeds (sometimes ~ 15%!), including many kidney diseases such as polycystic kidneys, MPGN and nephrolithiasis.
Within each of these breeds, there are very high rates of linkage disequilibrium, as there hasn’t been enough time for long stretches of DNA to be broken down by recombination. This makes genome-wide association (GWA) much easier than in human studies, such that for a simple Mendelian trait one may need as few as 40 dogs and a gene-chip with 15,000 SNPs (as opposed to thousands of patients and around a million SNPs in humans).
In the aforementioned study, the investigators examined the Nova Scotia Duck Tolling Retriever, a hunting dog with a very high prevalence of autoimmunity, including ANA positive lupus. Using a simple 2-step GWAS approach they identified no less than 5 novel candidate genes associated with the development of lupus, effectively blowing the field wide-open. Most of the genes identified code for proteins involved in the NFAT pathway of T-cell activation, including a calcineurin subunit. The existence of a disease-causing single nucleotide polymorphism in calcineurin suggests a possible genetic explanation for differential treatment responses to cyclosporin / tacro in Lupus. Furthermore, as the NFAT pathway is known to be involved in peripheral tolerance, these results may result in a ground-shift in our understanding of the mechanism of this disease.
Conall O' Seaghdha genetics of kidney disease lupus nephritis
Previous Post