Hemolytic uremic syndrome is a thrombotic microangiopathy characterized by thrombocytopenia, microangiopathic hemolytic anemia and renal impairment. Most cases (90%) are secondary to infections, such as E. Coli (serotypes O157:H7, O103:H2). For a more comprehensive review about aHUS, check this paper. The rest of the cases are classified as atypical uremic syndrome (aHUS), which is typically associated with a poor prognosis. There is a previous post about Eculizumab and renal transplantation on the RFN.

The majority of the patients with aHUS are affected during childhood and teenage years to the point of developing kidney failure. When kidneys are severely involved the best treatment option is kidney transplantation. These patients are at high risk for recurrence of the disease after transplantation and a high percentage of these patients lose their kidney allografts. In patients with mutations in Factor H and Factor I, recurrence occurs in about 70-80% of the cases. Other less common mutations associated with recurrence, are C3 and FB. Furthermore, it has been reported that mutations in the MCP (membrane associated regulator, CD46) gene are less likely to be associated with recurrence, because the mutation affects the endothelial cells and renal transplantation would restore normal endothelial MCP function in the kidney.

Eculizumab is indicated for the treatment of paroxysmal nocturnal hemoglobinuria and aHUS. It is also used in ABO-incompatible living donor kidney transplantation and antibody mediated rejection. This monoclonal antibody binds the complement protein C5, blocking its cleavage into C5a and C5b, hence preventing the formation of MAC. The authors of this paper concluded that eculizumab was effective in patients with aHUS and native kidneys. I found approximately 15 adult cases reported in the literature that received prophylactic eculizumab to prevent post-transplant aHUS suggesting that this approach is effective. However there are no standardized protocols for administration of the drug preoperatively. In these cases, patients received a dose of eculizumab 1,200 mg IV 24 hours prior to transplantation, and after transplantation 900 mg IV weekly for 4 weeks started on post-operative day 1, and then 1,200 mg IV bi-weekly afterwards. This is based on the manufacturer’s recommendations. There are also pediatric cases and the majority of them have had successful transplantation without recurrence of aHUS. All of these case reports, have used different pre-emptive protocols. In one case , the patient was started on eculizumab 7 months prior, receiving 600 mg as the initial dose, followed by 300 mg every two weeks thereafter. In another case, eculizumab was given 2 hours prior to kidney transplantation and in other case, it was given 6 hours prior.

The University of Iowa has developed a protocol aimed for the pediatric population. Additionally, an aHUS longitudinal study is currently underway by the Molecular Otolaryngology and Renal Research Laboratories lead by Dr. Richard Smith, that will follow up biomarkers to assess what happens to patients with aHUS over time. This data-gathering is mostly because eculizumab has changed the survival curve and it is important to know the long-term outcomes.

Unfortunately, there is no data in regards to treatment withdrawal, but it is clear that single doses of eculizumab are ineffective and discontinuing the medication is associated with risk of recurrence in the first 3 months, hence treatment should be life-long. In regards to maintenance therapy, it has been reported that although tacrolimus and cyclosporine are associated with TMA (data is conflicting), tacrolimus is the first choice due to lower rates of TMA. Additionally, plasma exchange was also reported to be effective in some patients prior to the introduction of eculizumab as reported by Zuber et al. Furthermore, liver- kidney transplantation could be a potential cure for aHUS as the authors concluded in this paper. Also, it’s important to point out that patients require meningococcal vaccination prior to eculizumab administration 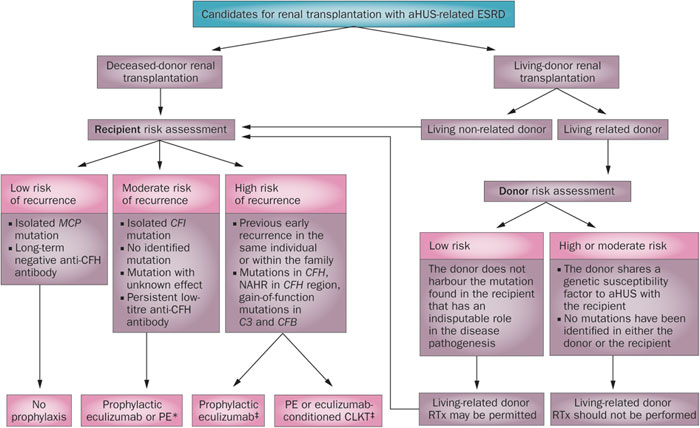 Eculizumab is expensive. I checked different sources for costs; a 300-mg vial costs around $7,500; consider the fact that this drug needs to be given life-long on a bi-weekly or monthly basis. Some sources consider it the most expensive drug in the world. Finally, eculizumab has protected rights until 2017 and until then, biosimilars would have the potential to reduce treatment costs. In conclusion, given the rarity of this disease it would be difficult to have a large randomized control trial, but given the available evidence, it appears to be effective in preventing the recurrence of the disease after transplantation.
(A warm thank you to Dr. Smith, Dr. Haririan and Dr. Thomas for their support and guidance)

What is the expected kidney function of a patient after donating a kidney?