It is not often you see components of a basic metabolic panel (BMP) as a headline in the news. However, in one corner of the world, “creatinine” has become a term that commonly used by the public. It is a word that has spread fear and despair throughout Central America.

“La Creatinina” is the colloquial term for mesoamerican nephropathy, an epidemic of chronic kidney disease (CKD) of unknown etiology that disproportionally affects young, male agricultural workers who are without other risk factors for kidney disease. CKD mortality rates in Nicaragua and El Salvador are 4 times the global mortality rates as a result (Figure 1). 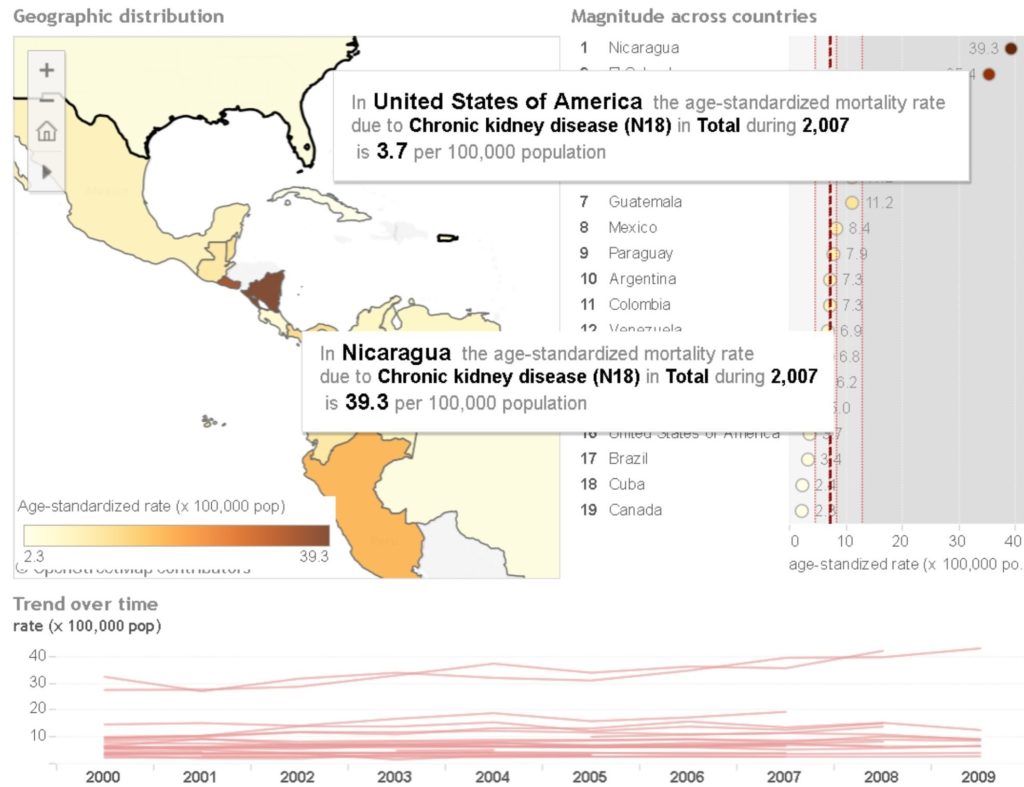 While the pathogenesis is still not fully clear, proposed mechanisms include acute kidney injury to due to a number of factors; chronic volume depletion, agrichemical exposure, heavy metal exposure, hydration with fructose-laden drinks, uric acid disorder, infections, ingestion of unregulated alcohol, excessive use of NSAIDs, and several others (Figure 2). It is possible that several of these factors combined contribute to the disease.

Patients often present nonspecific symptoms of arthralgias, muscle cramps, nocturia, dysuria, back pain, fever, headache, tachycardia and dizziness. These symptoms often lead to use of NSAIDs or antibiotics for presumed UTI in this population possibly further contributing injury. In addition, some workers are often reluctant to hydrate due fear of water contamination.

Ultrasound of the kidneys often reveal small kidney sizes and decreased cortical thickness. Kidney biopsies have been performed on patients from Nicargua and El Salvador who presented with kidney disease. At the earliest stage of the disease, biopsies show tubulointerstitial nephritis with cellular infiltrates and inflammation but intact glomeruli. This suggests that acute interstitial nephritis precedes the development of CKD. Biopsies performed later in the disease show tubular atrophy, tubular fibrosis, and chronic glomerular changes.

Diagnosis should be suspected in Central American agricultural workers presenting with decreased GFR and the lab findings discussed above. Other causes of kidney disease should be excluded. The diagnosis can be confirmed with a kidney biopsy.

I learned about “La Creatinina” while in Nicaragua when my travel route was affected by road closures due to protests. Demonstrators held hand-written signs “Stop the Creatinine” translated from Spanish. They were picketing a large sugar cane company in Nicaragua whose workers have been greatly affected by mesoamerican nephropathy. My love for this country where I had lived almost every summer for the past 15 years has now manifested itself in my desire to pursue nephrology and address this startling epidemic. It is my goal to raise awareness of this disease, especially within the nephrology community where research and attention to mesoamerican nephropathy can truly benefit a suffering and vulnerable population.

Don’t be Alarmed, but Your Kidney has a Clock

What Happens on Dialysis is Likely from Dialysis: Tunneled Dialysis Catheter Infections