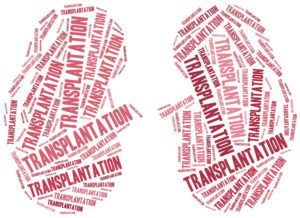 Kidney transplant efforts began in 1890’s with development of suturing techniques and experimental xenografts. Mathiu Jaboulay, Chief of Surgery in Lyon, and Julis Dorfler, a German surgeon, developed a full thickness blood vessel suturing technique in 1895 that allowed surgeons to explore the potential for kidney transplants. The first technically successful kidney transplant was accomplished by Emerich Ullmann in 1902, with a dog auto-transplant and dog-to-goat xenograft, but both only lasted a few days.   Four years later, the first two renal transplants in humans were performed by Jaboulay using a goat and pig kidney. Both recipients died within days, with grafts failing from early vascular thrombosis.

Progress was slow until Alexis Carrel (student of Jaboulay’s who perfected his vascular suturing technique) moved from France to Chicago,  and partnered with physiologist Charles Guthrie. Together, they successfully transplanted kidney, thyroid, ovary, heart, lung, and small bowel in animals, publishing 33 papers that remain the basis of many concepts of modern transplantation surgery today (Carrel later won the 1912 Nobel Prize for this).  One of his landmark findings was that autografts (same person graft) could be consistently successful but homografts (same species, different person) never were. This was explored further by a researcher Leo Loeb, who has largely been forgotten. In the 1930’s, he emigrated from Nazi Germany and began working at Washington University-St. Louis. He determined the strength and timing of rejection of skin homografts in rats was related to the extent of genetic disparity between donor and recipient,  and this likely involved lymphocytes. Unfortunately, due to a failure of graft exchange between unknowingly inadequately inbred mice, he was ridiculed and dismissed, and importance of the lymphocyte was ignored for years.

The first human- human kidney transplant was performed in 1933 by Soviet surgeon Yuri Voronoy. The recipient was a 26-year-old woman admitted with uremic coma after swallowing mercury chloride in a suicide attempt, and the donor, a 60-year-old man who had died from a basilar skull fracture. The kidney was procured 6 hours after death and transplanted across a major blood group mismatch. The recipient died two days later, never having made urine. However, at autopsy, the vessels were patent.

Rene Kuss, Charles Dubost, and Marceau Servelle in Paris performed nine human- human kidney transplants in 1951, with a technique developed by Kuss that is still the standard operation used today. He placed the kidneys retroperitoneally in the pelvis, revascularized by iliac vessels with the ureter anastomosed to the bladder. All nine patients rejected their grafts and died within days or weeks. Concurrently from 1951-1953, David Hume at Brigham Hospital performed nine kidney transplants, one of which functioned for five and a half months before it was rejected.

Joseph Murray has the first success in kidney transplant in 1954 . His patient was Richard Herrick, a 24-year-old man with CKD and severe hypertension due to glomerulonephritis and the donor was his identical twin, Ronald. Transplantation occurred with 82 minutes of warm ischemia time, with immediate graft function and lasted for eight years. In hindsight, this was nothing new as the surgical techniques had already been established and identical twin skin grafts were known to be successful. Nonetheless, it reignited interest and excitement in the potential of kidney transplant.

Research in rejection was also steadily progressing, with a zoologist named Peter Medawar making great strides in understanding that skin graft rejection is an immune response, with leukocytes playing a significant role.  With this, attention was turned towards breaching the immunological response. In 1958, Murray conditioned twelve recipients with total body irradiation and donor bone marrow prior to transplant. Only one recipient survived, but he maintained adequate function of his fraternal brother’s kidney for 20 years. This was the first time that the genetic barrier to human kidney transplantation had been breached.

This success was replicated by Jean Hamburger in Paris months later, with irradiation in a fraternal twin transplant that functioned for 26 years. Between 1960-1962, Hamburger and Kuss performed four successful transplants in non-twin recipients conditioned by total body irradiation, inspiring continued efforts in transplantation.  Given these successes, immunosuppression continued to be a hotly researched topic, with Willard Goodwin at UCLA exploring the use of corticosteroids and Roy Calne & Joseph Murray experimenting with 6-mercaptopurine and azathioprine.

In 1963, thirteen international teams of the world’s most active transplant clinicians and scientists assembled in Washington to review the status of human kidney transplantation. The results were extremely discouraging. To summarize:

However, Tom Starzl (relatively unknown at the time) had more surviving patients than the rest of the world’s better-known participants combined. He had developed a new immunosuppression protocol of prednisone plus azathioprine that allowed over a 70% one year renal graft survival rate. Before the NRC conference, there were only 3 active renal transplant centers in North America, which increased to 50 in a year and this Strazl’s regimen became the world standard for nearly the next two decades.

Since the 1960’s, transplantation has made great strides. Discovery of HLA antibodies and development of microcytotoxicity assays made tissue typing and antibody screening much more widely available. The acceptance of brain death in 1968 had major ramifications on the donor pool, as did the technology enabling organ preservation. Organ cooling, pre-transplant infusion and then the introduction of the University of Wisconsin solution allowed organs to not only be preserved for better transplant outcomes, but also transported and shared between centers. This led to the National Transplant Act and the establishment of the United Network for Organ Sharing (UNOS) in 1984. We are now expanding the donor pool with ABO incompatible and virally infected kidneys to deal with the organ shortage.

Here They Are: The Most Popular Resources Used to Study for the Nephrology Board Exam

“Let’s Talk About Peritoneal Dialysis” Post 6: We Have a Leak!