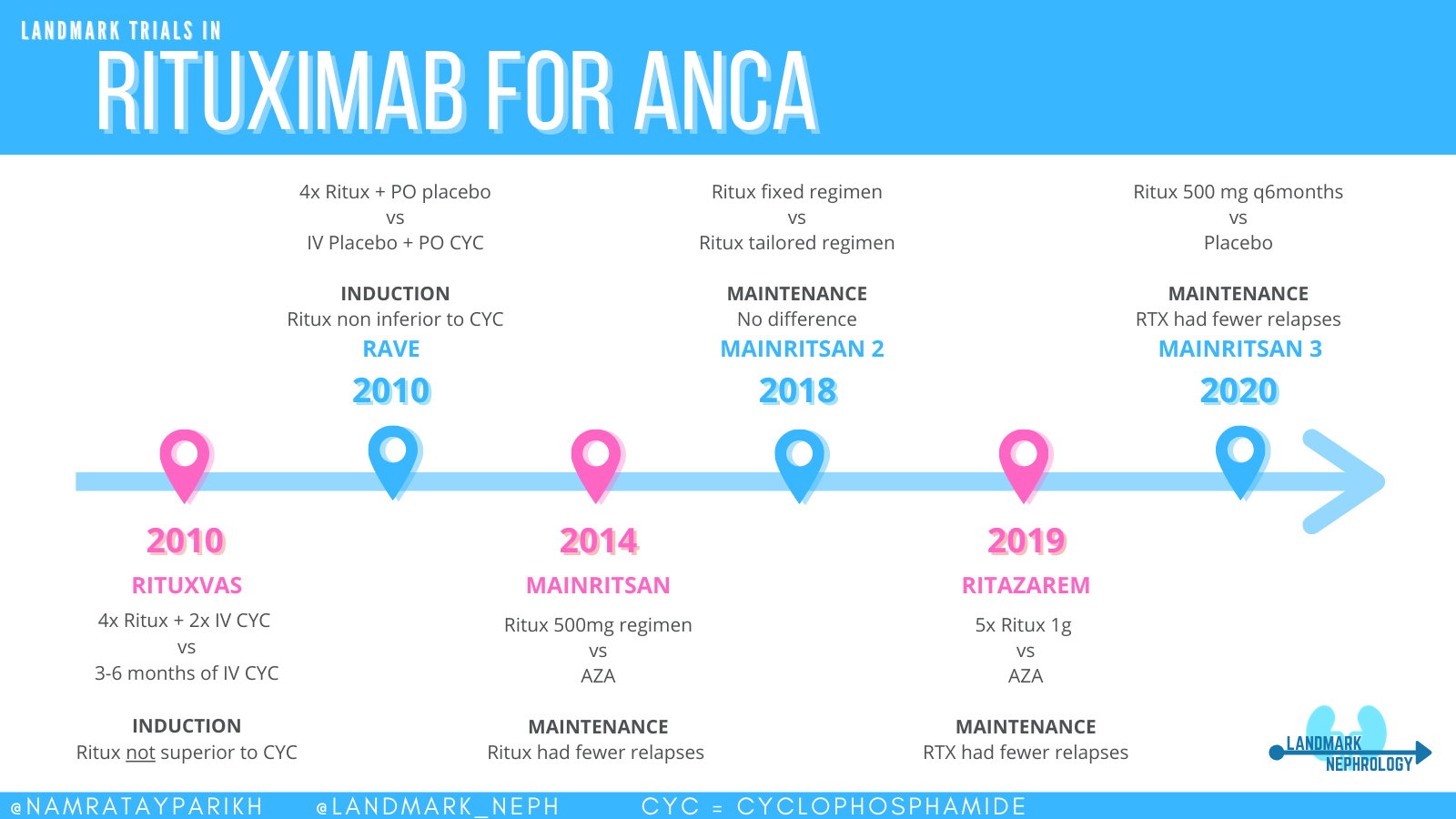 Antineutrophil cytoplasmic antibody (ANCA)-associated vasculitis (AAV) is a group of autoimmune disorders whose hallmark is inflammation of small blood vessels throughout the body, producing a myriad of manifestations. AAV had once been considered to be a rare disease with a reported prevalence of 48-184 cases per million persons. However,it is now believed to be much more common and the current reported prevalence is around 300-421 cases per million persons.

The pathophysiology of AAV is a loss of immune tolerance (due to various genetic and environmental factors), which leads to production of auto-reactive antibodies, namely, anti neutrophil cytoplasmic antibodies (ANCAs). ANCAs are directed against specific antigens located in the cytoplasm of neutrophils, which form the body’s first line of defence against external stresses. The most well characterized antigens against which ANCAs are formed are myeloperoxidase (MPO) and proteinase 3 (PR3). Other antigens include lysosome associated membrane protein 2 (LAMP2), complementary PR3 (cPR3) peptides, moesin, plasminogen, peroxidasin, and pentraxin. Subsequent infection and inflammation leads to ‘priming’ of the neutrophils and expression of these antigens on the surface, where interaction with preformed ANCAs leads to neutrophil activation, precipitating endothelial damage and inflammation and damage of the blood vessels termed vasculitis. More details regarding pathogenesis can be found here.

Initially, cyclophosphamide was the cornerstone of AAV treatment. See our previous timeline here. However, in recent years, rituximab has emerged as an additional therapeutic option with a better safety profile. Rituximab acts on CD20 receptors on peripheral B cells and inhibits the immune mediated destruction by several mechanisms:

It follows that rituximab should play an important role in the management of AAV. Indeed, it is the only ‘kidney-related’ indication, for which the US – FDA has given approval (In April 2011).

Rituximab has been extensively tried in clinical trials for remission induction as well as maintenance. Some of the most prominent ones are discussed here

This open-label trial studied the use of rituximab as an induction agent in 44 patients with newly diagnosed AAV with kidney involvement.

This study did take the step of involving older individuals with a median age of 68 years.

Before enrollment, patients could receive plasma exchange or intravenous (IV) methylprednisolone, according to disease severity. After randomization, all patients were given 1 gram IV methylprednisolone and then oral glucocorticoids. Patients in the intervention arm received rituximab 375 mg/m2 body surface area (BSA) per week, for 4 consecutive weeks, and IV cyclophosphamide 15 mg/kg with the first and third rituximab infusions; these patients did not receive azathioprine for maintenance (although they did receive glucocorticoids). Patients with progressive disease within the first 6 months were permitted a third dose of IV cyclophosphamide. Patients in the control arm received IV cyclophosphamide 15 mg/kg every two weeks for the first three doses, then every three weeks thereafter until stable remission was achieved. They also received azathioprine.

Further treatment with rituximab or cyclophosphamide was permitted in cases of relapse.

The primary outcomes were sustained remission and rates of severe adverse events at 12 months.

The primary endpoint was remission and successful completion of the prednisone taper at 6 months.

This trial showed that rituximab was non inferior to cyclophosphamide for induction therapy – rituximab remission rates were 64% versus 53% with cycloy. Although not a primary endpoint, in a prespecified subgroup analysis, it was found that in patients with relapsing disease, rituximab was superior at 6 months and 12 months, but this effect did not extend out to 18 months. It is important to mention that this trial excluded patients with serum creatinine > 4 mg/dL and patients with alveolar hemorrhage who required mechanical ventilation. Interestingly, the rituximab group had similar rates of adverse events to the cyclophosphamide group. Overall, the remission rate of this study cohort was lower than seen in previous studies – the authors attributed this to the strict 6 month steroid taper.

In this trial, rituximab was studied as a maintenance agent. It was a non blinded randomized controlled trial with 115 patients having newly diagnosed or relapsing AAV in complete remission. For induction, IV methylprednisolone (500-1000 mg/day for 1-3 days) or IV cyclophosphamide (0.6 g/m2 BSA on days 0,14 and 28 and then 0.7 g/m2 BSA every 3 weeks for 3-6 doses) were used. After achieving remission, and within 1 month of the last cyclophosphamide pulse, eligible patients were randomized to either rituximab or azathioprine.

Patients in the intervention group received rituximab (fixed 500 mg IV) on days 0 and 14 after randomization, and then at months 6, 12, and 18 after the first infusion. Patients in the control group received azathioprine (2 mg/kg/day) for 12 months, followed by dose reduction (1.5 mg/kg/day for 6 months and then 1 mg/kg/day for 4 months). Prednisone was further tapered and then kept at a low dose for at least 18 months after randomization.

The primary endpoint was the percentage of patients with major relapse (reappearance or worsening of disease with a BVAS >0 and involvement of at least one major organ, a life-threatening manifestation, or both) at month 28.

After rituximab was established as an option for maintenance treatment, MAINRITSAN 2 tried to clarify if the timing of rituximab doses was a factor in ensuring relapse-free maintenance. This was an open-label, multicenter, randomized controlled trial including 162 patients with newly diagnosed or relapsing AAV, in complete remission after induction therapy with glucocorticoids and cyclophosphamide, rituximab or methotrexate.

Both intervention and control arms used rituximab, the difference being in the dosage protocol. One group of patients received a 500 mg rituximab infusion at randomization, with reinfusion only when CD19+ B lymphocytes or ANCA reappeared or ANCA titre rose markedly. Study visits were scheduled at enrolment, then every 3 months until the endpoint, 28 months after randomisation. At each visit, BVAS was calculated and blood samples, for CD19+ B lymphocytes and ANCA titres, were drawn from every patient. Thus, in this arm, treatment was individually tailored for each patient.

Controls received a fixed 500 mg rituximab infusion on days 0 and 14 post randomization, then 6, 12 and 18 months after the first infusion.

The primary endpoint at month 28 was the number of relapses, defined as reappearance or worsening of symptoms or BVAS>0

At 28 months, there were 22 relapses of which 14 were in the tailored regimen group and 8 were in the fixed schedule group (P = 0.22). Thus, there was no significant difference in the relapse rates between the two groups. Note that individually tailored-arm patients received fewer rituximab infusions.

RITAZAREM was an open-label RCT designed with the aim of comparing rituximab with the treatment standard azathioprine for the maintenance of remission. 170 patients with relapsing disease in complete remission after induction with rituximab (4 doses of 375mg/m2 BSA/week) and glucocorticoids were studied (compared to MAINRITSAN where newly diagnosed patients were first treated with cyclophosphamide induction).Rituximab 1000 mg every 4 months for 5 doses was compared with azathioprine 2 mg/kg/day.

Patients were followed for a minimum of 36 months, with the primary outcome being time to disease relapse

MAINRITSAN 3 evaluated the efficacy of an extended rituximab maintenance regimen attempting to address the question of what the optimal duration of maintenance therapy with rituximab is. This was a multicenter, double-blind RCT, which enrolled patients who had successfully completed the MAINRITSAN 2 trial without any major relapses and were in complete remission after the first phase of maintenance therapy (patients had to have Birmingham vasculitis activity score (BVAS); version 3 of 0 for 18 months).

The primary endpoint was relapse-free survival at month 28.

68 patients with GPA and 29 with MPA were randomized to receive standard maintenance therapy with rituximab 500 mg or placebo, every 6 months for an additional 18 months (4 doses). At 28 months (after MAINRITSAN 2), the primary end point of relapse free survival was achieved in 96% patients who received Rituximab compared to 74% in the placebo arm (P=0.008). 24% of patients in the intervention arm had serious adverse events (such as infections, cardiac or thromboembolic complications) as compared to 30% in the placebo arm. The authors concluded that extended therapy with biannual rituximab infusions over 18 months was associated with a lower incidence of AAV relapse compared with standard maintenance therapy.

Rituximab has emerged as an effective candidate in the management of ANCA associated vasculitis, both as an induction and a maintenance agent, which may be useful in avoiding glucocorticoids.

Although RITUXVAS did not prove superiority of rituximab over cyclophosphamide, it did establish rituximab as a real option in AAV induction. RAVE further established the non-inferiority of rituximab as an induction agent in AAV. MAINRITSAN was an important trial that highlighted  the efficacy of rituximab as a maintenance agent witha fixed dose and schedule, while MAINRITSAN 2 confirmed that it produced similar results in a regimen tailored as per CD19+ B Lymphocyte count and ANCA titres. These findings were further expanded by the results of MAINRITSAN3 which demonstrated that extended maintenance therapy with rituximab had a lower incidence of AAV relapses. RITAZAREM showed us that continued therapy with rituximab for maintenance after induction appears to be  a better strategy for preventing relapses than azathioprine..

Kidney involvement portends poor outcomes in patients with AAV. Rituximab has been studied in several randomized clinical trials and shows good efficacy both as an induction and a maintenance agent and also carries the advantage of avoiding the cytotoxic side effects associated with cyclophosphamide such as infertility. However, cyclophosphamide should be preferentially used  in patients with associated alveolar haemorrhage or rapidly progressive/crescentic glomerulonephritis according to KDIGO guidelines.

What do the current guidelines say?

The European League Against Rheumatism in conjunction with the European Renal Association—European Dialysis and Transplant Association (ERA-EDTA), EULAR/ ERA-EDTA, published guidelines which recommended use of either cyclophosphamide (1A) or rituximab (1B) for remission induction and maintenance. If the initial regimen included cyclophosphamide, use of rituximab is recommended in refractory cases (1B). 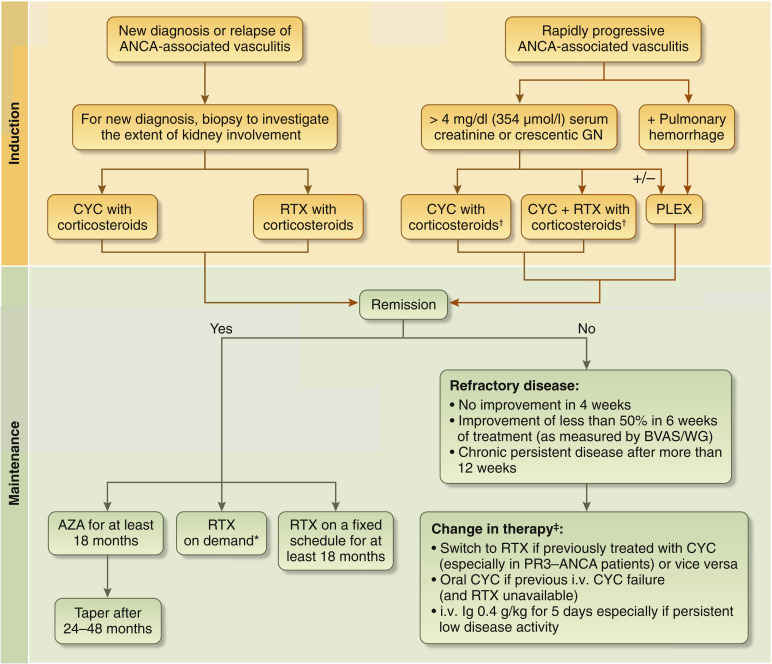 Cystinosis and kidney: known, unknown, and the future!