Introduction: Efforts to find therapeutics and interventions that can modify the trajectory of chronic kidney disease and potentially delay the progression of kidney failure are ongoing. One such intervention has been getting some press lately. Observational data have shown that the very creation of the arteriovenous fistula in preparation for dialysis is associated with  delayed progression to kidney failure and initiation of renal replacement therapy. This blog post examines the data behind this observation and if creation of arteriovenous fistula is an incentive to alter chronic kidney disease progression.

Does creation of arteriovenous fistula delay progression? In 2015, Golper et al observed that the creation of arteriovenous fistula in a small heterogenous sample of 123 patients from a single center can delay the initiation of renal replacement therapy. They determine this trend by comparing mean eGFR during an observation period of 2 years before and after fistula creation over a total period of about 4 years. They note that eGFR declined from 28.3 ml/min to 16.9 ml/min before fistula creation but declined only to a mean of 15.8 ml/min after creation. Follow up of creatinine stopped if the patient initiated dialysis, succumbed to death or was transplanted. It is unclear what the mean follow up period was in these 3 subgroups. At the outset,It is difficult to accept the conclusions drawn in this study due to several limitations. All patients who received an arteriovenous fistula were assumed to be due to progression of chronic kidney disease. Patient characteristics such as age, sex, medication use, presence of co-morbid conditions were not used in the analysis. More importantly, eGFR was calculated using the MDRD equation, which performs better than CKD-EPI equation in patients with lower eGFR but patient weight over the time period was not considered which can affect creatinine. Additionally, albuminuria was not documented which is correlated with progression of kidney disease. In addition, patients were not compared to any control group in this study nullifying the conclusions. During the 2 year follow up period after creation of arteriovenous fistula the majority of them (~ 58% (n=72) initiated dialysis. Only about 30% did not initiate renal replacement therapy and 5% were transplanted and might represent “regressors.” Also, this cohort had a significantly lower mortality rate (about 0.03%). 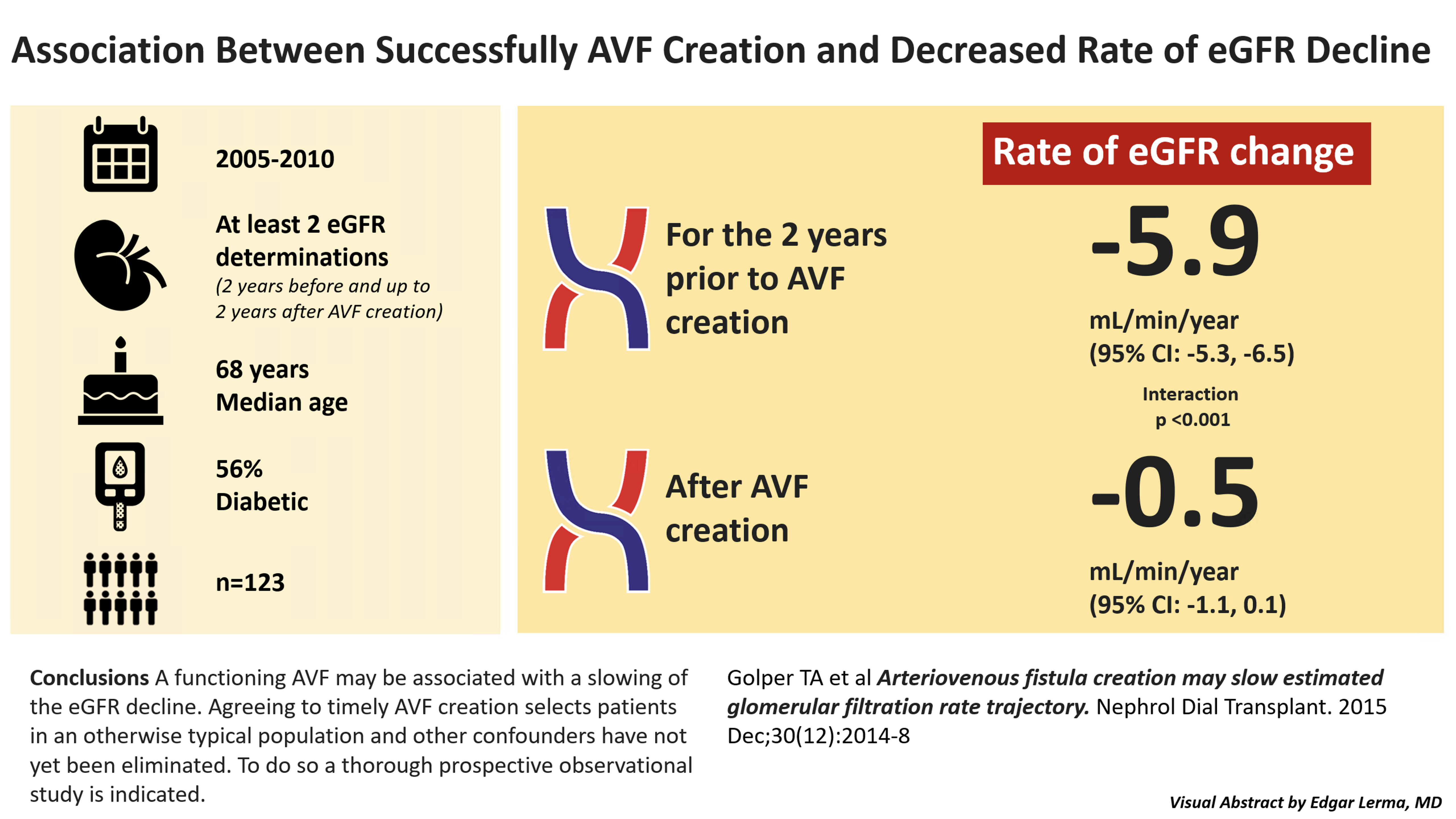 Similar conclusions were drawn from a larger retrospective study with about 3000 United States veterans comparing patients with arteriovenous fistula or graft and patients who initiated dialysis with a catheter. Specifically, they compared eGFR trajectory 6 months prior to dialysis initiation with catheter vs the 6 month period after arteriovenous fistula or graft creation. The authors found that there was a deceleration of eGFR after vascular access creation that was independent of maturation. Again, given the retrospective nature of the study, causality cannot be inferred. In addition, patients who initiated dialysis with the catheter appeared to be sicker although the authors adjusted for confounding variables.

A plausible explanation for reduction in kidney disease progression is the effect of arteriovenous fistula on renal hemodynamics. Given that the arteriovenous fistula is a low resistance vessel, overall systemic vascular resistance will be reduced evidenced by reduction in systolic and diastolic blood pressures. In addition, the shunt increases preload augmenting pulmonary flow and cardiac output leading to increased oxygen delivery to the distal tissues and reduction in renal ischemia. These concerted effects might delay progression of kidney disease after fistula creation.

Conclusion: The finding that creation of arteriovenous fistula delays kidney disease progression is yet to be investigated using prospective clinical trials. How much of the observed phenomenon is patients who will ultimately regress given the natural history of advanced kidney disease needs to be deciphered. Perhaps investigating whether this is also observed in the subset of patients who are at high risk of progression such as patients who are older and with severe albuminuria might be the next step in determining an association or causality.

Addendum (10/15): We added this addendum to clarify some of the points of the post after discussion on Twitter. The observational data likely represents the natural history of chronic kidney disease patients where a large portion of patients experience regression to the mean and thus do not need to initiate kidney replacement therapy. Moreover, it was pointed out that the creation of arteriovenous fistula can help with patient engagement by motivating lifestyle modifications but such studies should not advocate for fistula creation as access type should be individualized for every patient. Thus, the above observational studies have significant methodological flaws. It is unlikely that the AVF creation improved kidney function for the aforementioned issues. However, it is also worth noting that the AVF creation does not lead to worsening of kidney function.