Acknowledgements: This post is part of a collaboration between The Renal Fellow Network and the American Society of Diagnostic and Interventional Nephrology (ASDIN), whose mission is to provide excellence in dialysis access care to improve outcomes for patients with kidney disease. For more information about the ASDIN mission or membership, click here. Special thanks to the ASDIN Social Media Committee for their support on this project.

Traditionally, a multi-disciplinary team approach for vascular access preservation has been advocated only for patients with advanced chronic kidney disease or end-stage kidney disease. Several collaborative programs have described the complexity of care required, and specific expertise offered, by various disciplines including nephrology, surgery, radiology and nursing. These services are provided at various facilities that include office-based settings as well as standalone ambulatory vascular access centers, hospital-based interventional suites, ambulatory surgery centers and cardiac catheterization laboratories.

The management of vascular access in critically-ill patients with acute kidney injury (AKI) presents a unique set of challenges, due to its occurrence in a setting far removed from traditional access preservation advocates. AKI requiring kidney replacement therapy (KRT), designated as AKI-D (acute kidney injury-dialysis), occurs in approximately 6-7% of critically ill patients, and 10–30% of survivors with AKI-D remain KRT dependent at hospital discharge. In patients with high risk of ongoing need for dialysis following AKI-D, vasculature preservation strategies need to be considered early in their ICU course. Consequently, a unique and innovative collaboration between interventional nephrology, medical intensive care physicians and critical care trained nurses skilled in difficult vascular access at the Cleveland Clinic has evolved with the specific goal of balancing the competing vascular access demands of critically-ill patients.

In the intensive care unit (ICU), peripheral and central venous access is crucial for providing hemodynamic support, intravenous fluids, medications, parenteral nutrition, advanced therapies such as KRT and extracorporeal membrane oxygenation (ECMO). For a patient admitted with AKI to the ICU, a planned approach to vascular access management provides the short-term benefits of establishing a reliable and durable access for KRT, as well as potentially reducing the incidence of catheter-related blood stream infections (CRBSI). Long-term benefits include preservation of the central and peripheral vasculature for future arteriovenous access creation. In order to achieve the aforementioned short and long-term objectives, with regards to improving vascular access outcomes in critically-ill patients with AKI, the advanced vascular access team at the Cleveland Clinic facilitates the early conversion of non-tunneled to tunneled central venous catheters (CVC), including hemodialysis catheters. (Table 1) 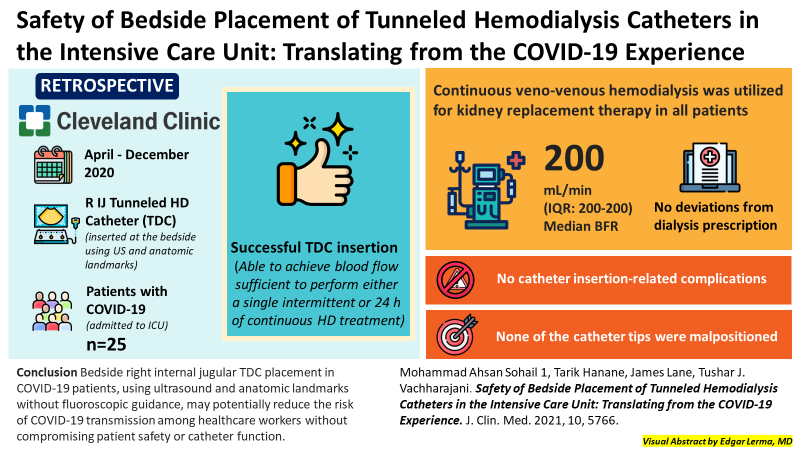 Non-tunneled CVCs are placed percutaneously such that the catheter exits the skin in the vicinity of the venous cannulation site and are commonly placed into the internal jugular, subclavian, or femoral veins. (Fig. 1) Tunneled CVCs, on the other hand, involve creating a short subcutaneous passage below the skin before the catheter enters the targeted central vein. These catheters have a dacron cuff positioned 1 to 2 cm from the skin exit site. Fibrous tissue growth onto the cuff seals off the catheter in the subcutaneous tunnel, to reduce the risk of infection. Tunneling reduces translocation of bacteria from the skin and exposed parts of the catheter into the bloodstream. Consequently, the incidence of CRBSIs is lower with tunneled CVCs compared with non-tunneled CVCs . Similarly, tunneled hemodialysis catheters (TDC) are also associated with lower rates of CRBSIs compared with non-tunneled hemodialysis catheters (NTDC). Furthermore, TDCs are made with soft polymers with a soft flexible tip and are less prone to mechanical complications, such as vessel perforation, as compared with the more rigid NTDCs. Finally, TDCs provide greater average blood flow rates than NTDCs, not only because they are available in larger diameters (16 Fr versus 13.5 Fr), (Fig. 2) but also owing to the positioning of the catheter tip most commonly in the upper right atrial junction for TDCs versus the superior vena cava for NTDCs.

Another innovative approach to vascular access management, that was adopted by the advanced vascular access team, was to perform bedside insertion of tunneled CVCs and TDCs using ultrasound guidance and anatomic landmarks without fluoroscopy. This strategy avoids transporting hemodynamically unstable patients or those requiring isolation (e.g. COVID-19, Clostridium difficile infection) out of the ICU to the fluoroscopy suite; promoting patient safety and reducing the risk of nosocomial transmission of infections. Around the time the advanced vascular access team was established in March 2020, the ICU community was faced with multiple challenges pertaining to the clinical management of patients with COVID-19 including preventing infection transmission, maintaining a safe work environment for the ICU staff and minimizing the stress on work force capacity. Kidney involvement in critically-ill patients with COVID-19 infection was common, and some of these patients ultimately required placement of a catheter for initiation of KRT. The standard of care for TDC placement requires that the procedure be performed under ultrasound and fluoroscopic guidance to ensure fewer complications and adequate catheter function. Unfortunately, this would normally entail transferring patients out of the ICU to the fluoroscopy suite, increasing the risk of transmission potentially exposing additional patients and health care workers.

It was proposed that bedside tunneled catheter placement in the ICU, utilizing ultrasound guidance and anatomic landmarks, could be safely and successfully accomplished. The protocol followed for tunneled central catheter insertion using anatomic landmarks, as previously published, is described as follows: the manubrium-sternal angle topographically corresponds to the carina, with the insertion depth estimated by measuring the distance between the skin venipuncture site 1-2 cm above the clavicle and a point 5 cm below the manubrium-sternal angle, and the catheter length determined by adding the insertion depth to the tunnel length. (Fig. 3) 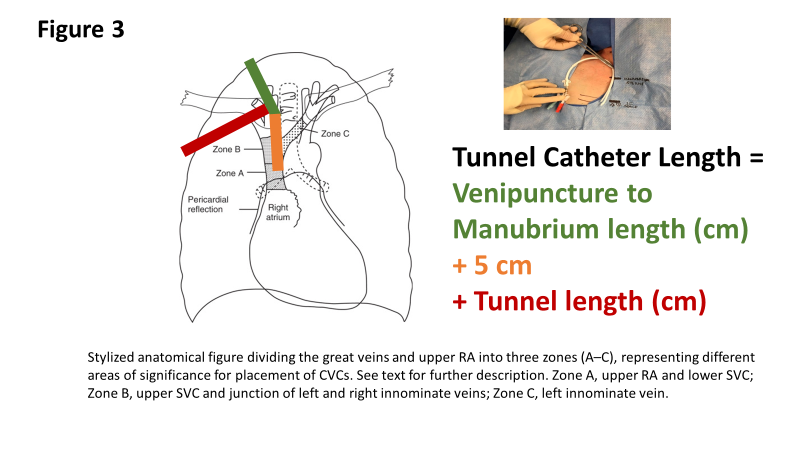 Between March 2020 and April 2022, the advanced vascular access team at Cleveland Clinic placed 678 tunneled central vein catheters in critically-ill patients, including 335 tunneled CVCs and 343 TDCs. Non-tunneled vascular access was converted into tunneled vascular access within a period of up to 10 days. 300 of these tunneled catheter insertions were performed at the bedside, without fluoroscopic guidance. One patient was reported to have developed a pneumothorax as a complication, while 23 patients developed post-procedural bleeding requiring blood transfusions and/or direct insertion site pressure to achieve hemostasis. No other mechanical complications or CRBSIs were noted up to 30 days following catheter insertion (unpublished data).

In conclusion, maintaining vasculature for future arteriovenous vascular access in critically-ill patients with AKI-D is challenging given the competing vascular demands in the ICU setting. Vascular access preservation strategies need to be implemented early in this patient population. The Cleveland Clinic model of vascular access care is a single center experience which needs to be validated at other tertiary ICU facilities. Guidelines need to be developed to identify critically-ill patients with AKI-D who are candidates for early tunneled catheter insertion at the bedside. In the short-term, this vascular access care model could help establish reliable central venous access, as well as potentially reduce the incidence of CRBSIs and nosocomial infections. Ultimately, access planning in the acutely ill patient can assist in preserving veins for future arteriovenous access creation by limiting venipunctures performed during an ICU admission.

Urine Sediment of the Month: Another Look at Macroscopic Evaluation