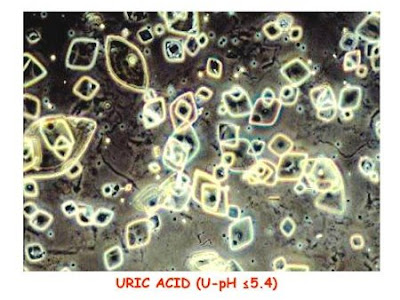 Interesting case from one of my calls last week (although I understandably would have been more enthusiastic about the case at the time had I been called about it 10 am rather than at 10 pm, prompting an overnight stay in the hospital by one unlucky Renal fellow).

A 65 year-old male with a history of acute lymphoblastic leukemia (ALL), completed chemotherapy about 3 weeks ago and thought to be in remission, went to his Oncologist’s office for a routine checkup. He was found to have a WBC of 30 with 50% blasts and a Cr of 8. Also of note his K was 5.9, his uric acid was 22, and sadly he noted that he hadn’t peed for 3 whole days (do you think you’d go see your doctor if you hadn’t peed all day long? I think I would, but who knows). The diagnosis wasn’t difficult: tumor lysis syndrome. The more interesting question was the management, and specifically, should he be dialyzed in the middle of the night or not?

On the pro-emergent dialysis side: He’s got a K of 5.9 with some peaked T-waves, and in the absence of urine output it may be difficult to get down on its own. Also, since uric acid is dialyzable, one could argue that it may be possible to minimize renal damage by getting rid of the uric acid.

On the anti-emergent dialysis side: His K isn’t all that high and we could try & get it down with kayexalate; we could give him Rasburicase (a recombinant urate oxidase medication) to acutely lower urate.

We did end up putting a dialysis catheter emergently and dialyzing him overnight, in addition to giving him a dose of Rasburicase. Within 48 hours his uric acid level was below the level of detection in our assay–I’m not sure whether the dialysis or the Rasburicase was more effective in acutely lowering serum urate. In any case, the patient received a total of 3 dialysis sessions, and fortunately has showed signs of making a complete renal recovery this weekend.

Bring on the chemo!