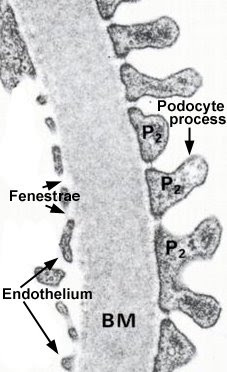 Double positive disease is much more common than this, however. One study by Levy et al in a 2006 Kidney International paper showed that 5% of all ANCA-positive serum samples were also positive for anti-GBM antibodies, and about 1/3 of all anti-GBM positive samples had detectable ANCA. Most of the time (82%) the double-positive patients had an anti-MPO (myeloperoxidase) specific antibody. Perhaps not surprisingly, the double antibody-positive patients have a worse outcome than single-positive patients.

One theory to explain the existence of double-positivity is that the disease starts off as an ANCA-mediated process and damages the glomerular basement membrane, thereby exposing antigens to which an anti-GBM can form. Treatment in the acute setting is generally aggressive (e.g., treat them as if they have anti-GBM disease) and chronically is often managed as an ANCA disease.