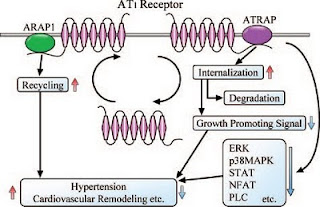 The renin-angiotensin system is powerful regulator of blood pressure homeostasis. An article published in the March 24 issue of JASN highlights an emerging area of research into the modulation of AT1 receptors on different tissues.

The majority of well-known angiotensin II actions are mediated via AT1 receptor stimulation, and angiotensin converting enzyme inhibitors (ACEi) and AT1 receptor blockers (ARBs) have been widely used as antihypertensive agents with cardiovascular protective effects. Elucidating factors that regulate AT1 receptor expression levels in different tissue compartments will hopefully lead to novel agents to treat hypertension and its associated end-organ damage (ESRD, CHF and Stroke). Recent studies have demonstrated the existence of several proteins interacting with AT1 receptors that may modulate AT1 receptor expression level, sensitivity and internalization. A recent review article highlights this emerging field. Atrap (AT1 receptor-associated protein) is the best characterized protein and the focus of the March 24 article by Oppermann et al.

It was previously reported that Atrap (a 19kD protein) interacts specifically with the carboxyl-terminal domain of the A1a receptor and catalyzes its internalization in cultured cells. Prior in vivo studies over-expressing the Atrap protein in the heart, aortae and femoral artery in mice demonstrated a protective effect in these tissues in response to angiotensin II infusion. Overall, the prevailing literature suggested an inhibitory or protective effect of Atrap on AT1 receptor function. This group knocked out the Atrap gene in mice to test this hypothesis in vivo.

They reported that Atrap KO mice have a higher resting blood pressure (by 10 mmHg) as measured by radiotelemety. Suggesting that Atrap is important in regulating basal blood pressure and that its absence leads to systemic hypertension. Interestingly, they found that Atrap is highly expressed in the kidney (then testis=adrenal>heart>lung=liver=aorta=brain). Specifically, they showed that Atrap is highly expressed in the proximal tubule of the kidney. Previous investigations have focused on the distal tubule as potential sites that affect blood pressure as most of the known genetic mutations in sodium transport causing hyper/hypotension are linked to the distal nephron (Bartter, Little, Gitelman syndromes, etc). This group reports that Atrap KO mice have more AT1 receptors in the proximal tubule which allows for increased angII-dependent NHE-3 activity causing volume expansion and hypertension.

This highlights the importance of investigating novel pathways regulating the renin-angiotensin system. Modulation of this system with the use of ACEi, ARBs and now direct renin inhibitors have continued to be the mainstay of therapy for patients with heart failure, diabetes, hypertension and kidney disease. Activation of Atrap may be more specific and more physiological for inhibition of At1 receptor signaling. New drug discovery modulating Atrap protein expression could lead to novel therapy. For now, much more research is needed.