The vast majority of us have been confronted with these questions: When to start dialysis in a patient in the ICU ? What modality should I start with? What kind of vascular access should I place? How I will know when to stop? The truth is that none of these questions have a straightforward answer. Nevertheless, in the last two years there have been 3 major clinical trials that tried to address the first question. This was a topic of discussion two year ago in NephJC.

The first is ELAIN published in JAMA 2016. This was a single center randomized controlled trial conducted in Germany. It included 231 critically ill patients with KDIGO stage 2 AKI. There were two intervention groups: Early initiation of RRT (within 8 hours of KDIGO stage 2 AKI, n = 112) and delayed initiation (within 12 hours of KDIGO stage 3 AKI or no initiation, n = 119). Eligible  patients were required to have NGAL >150 ng/ml and at least 1 of the  following criteria: sepsis, fluid overload, worsening SOFA score, or vasoactive support. The modality of RRT was CRRT for all the patients. The primary end point was mortality at 90 days.

Several important points are worth mentioning: first and foremost, 95% were surgical ICU patients (mostly cardiac surgery) and 100% and 90.8% of patients in the early and delayed arms received RRT (CRRT) respectively. One novel aspect of this trial was the use of NGAL to enroll patients. Nonetheless, just 3 patients were excluded for a low NGAL. Also the trial fragility index was only 3 (3 more deaths in the early group and the difference wouldn’t have been statistically significant).

The second study is AKIKI, published in NEJM the same year. This was a multicenter randomized controlled trial conducted in 31 centers in France. It included 620 critically ill patients with KDIGO stage 3 AKI who required mechanical ventilation, catecholamine infusion, or both and did not have a potentially life-threatening complication directly related to renal failure. There were two intervention groups: early initiation or RRT (within 6 hours of KDIGO stage 3 AKI, n = 311) and delayed initiation (emergent indication for RRT initiation, n = 308).

In this study, 80% of patient were septic and the modality of RRT they received was left to the discretion of the medical team in charge (55% IHD). The most striking fact is that roughly half of patients in the delayed arm didn’t received RRT.

The last kid on the block is the IDEAL-ICU trial published in NEJM in October 2018. This was a multicenter randomized controlled trial conducted in 24 centers in France. It was planned to include 864 critically ill patients with failure-stage F AKI (from the RIFLE classification) without life-threatening complications related to AKI and septic shock. The early-strategy group received RRT either within 12 hours after documentation of failure-stage AKI and the delayed-strategy group after 48 hours if renal recovery had not occurred.

The principal modality of RRT was CRRT (55%). Of the patients in the early-strategy group 97% received RRT with 62% in the delayed strategy group. Potential limitations include the early termination of the trial, the use of RIFLE criteria (which may not be the most sensitive classification for AKI) and 48hrs may not be enough time to allow the renal function to recover for the delayed group.

IDEAL-ICU reaffirmed the findings of AKIKI suggesting that septic ICU patients may not benefit from an early initiation strategy. The scale is now balancing towards initiation of RRT when we have strong indications for it, especially in septic patients with severe AKI. The bottom line is we have to avoid unnecessary RRT and don’t delay necessary RRT. This is not always easy, and many variables must be considered.

Currently, STARRT-AKI is enrolling patients. This is planned to be the largest study to date (n = 2866) from mixed ICUs in Canada. The RRT modality will be left to the physicians’ discretion and will hopefully add clarity to this difficult decision we face. 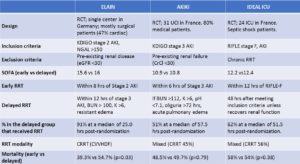