The 2019 Advancing American Kidney Health (AAKH) executive order set a goal: by 2025, 80% of incident patients with kidney failure should be treated with home dialysis therapies (peritoneal or home hemodialysis) or kidney transplantation. Though use of home therapies is increasing, this remains a lofty goal considering the current rate of dialysis. Per the most current 2020 USRDS data, only 11% of incident and 12.5% of prevalent patients with kidney failure on dialysis were treated with home dialysis.

The COVID-19 pandemic has amplified inequities in healthcare access for patients with kidney failure. (Novick et al ACKD 2020) Home dialysis, in theory, would be a solution to avoid the increased risk of SARS-CoV-2 infection faced by patients who use in-center dialysis. (Bourne Renal Fellow Network 2021) In this post we discuss barriers to home dialysis, racial disparities in home dialysis use in the United States, and propose solutions to make access to home dialysis more equitable.

Disparities in Home Dialysis Use

Black patients with kidney failure are more likely to dialyze in dialysis units with worse than expected survival outcomes, and in units that do not have home dialysis capabilities. Lower levels of education, unemployment, lack of pre-dialysis care, large body composition, non-white race, low socioeconomic status, proximity to dialysis unit, and presence of diabetes all have been associated with lower use of home dialysis (Thamer et al AJKD 2000; Stack et al JASN 2002). Overall, these disparities have declined over time, which may in part be related to expansion of care access under the Affordable Care Act (ACA) and the changes to the ESRD care bundle in 2011, but inequities remain.

Two studies in 2016 afforded a glimpse of racial disparities in access to home dialysis in the US. Mehrotra et al looked at all incidence and prevalent dialysis starts from 2007 to 2011. Black and Latinx patients with kidney failure in the study were much less likely to be referred to a nephrologist, less likely to have private insurance, and were often younger with fewer comorbidities compared with White patients. All racial groups, including Black and Latinx groups had a lower use of home dialysis, and clinical/demographic factors could not completely explain this difference. Transfer to in-center hemodialysis was higher in the Black population on PD.  Notably, risk in death by modality was lower in every racial group compared with White patients. 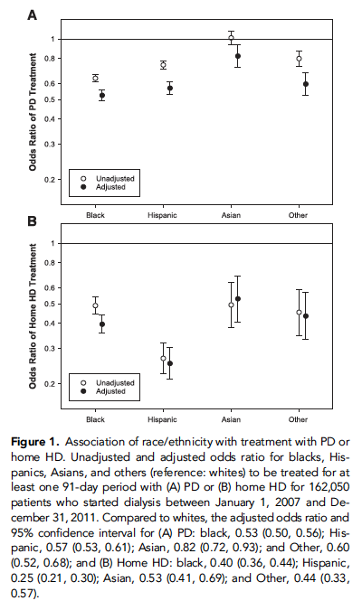 Figure 1 Figure from Mehrotra et al JASN 2016. Odds ratio of PD (A) and HHD (B) of initiating dialysis by race.

In 2020, Shen et al reviewed incident dialysis modality use by race between 2005-2013, and noted similar socioeconomic and clinical disparities as observed previously. Overall, Black patients were 31% less likely to initiate on home dialysis modalities, Latinx were 19% less likely. Once attenuated by clinical and socioeconomic factors, this risk was smaller, but was still present: Black patients were 24% less likely and Latinx were 10% less likely to utilize home therapies. Looking at the change in modality use at 90 days, disparities became more pronounced as White patients changed to home therapies. Over years, use of home therapies in all groups increased, though the racial disparities remained.

Barriers at the Patient Level

Lack of social support or concerns for performing dialysis independently are commonly cited concerns with home dialysis. One study in the Netherlands noted the most commonly cited barriers to PD were related to lack of social support or worry about performing PD independently. Many patients who choose home-based dialysis prefer to have a care partner. (Jager et al AJKD 2004) Accordingly, many patients have fears of performing independently, including lack of confidence with therapy at home, issues with self-cannulation in HHD, or fear of a catastrophic event. (Cafazzo et al CJASN 2009) Notably, lack of family support is twice as likely to be cited as a barrier in low income households. (Prakash et al CJASN 2013)

Barriers at the Provider Level

Lack of pre-dialysis care, including dialysis modality education, may account for part of racial disparities observed in home dialysis use. Simply, patients are more likely to choose PD when they receive adequate education about it (Devoe et al AJKD 2016). Shen et al noted a higher number of Black (36%) and Latinx (38%) patients had not seen a nephrologist prior to dialysis initiation compared with White patients with kidney failure. Many Black patients with kidney failure do not live in areas that offer PD, and living in areas of linguistic isolation may play a role in decreased home dialysis used within the Latinx community. Without pre-dialysis nephrology care, patients are more likely to initiate dialysis suboptimally- e.g, inpatient, via central venous catheter, and/or not on their chosen modality. Though a small number of patients do switch later to home dialysis modalities, the majority remain on in-center hemodialysis. This is due to patient preference, modality indecision, logistical issues (such as PD catheter placement), lack of pre-dialysis nephrology follow-up, in addition to unanticipated dialysis initiation (Imbeault et al Can J Kidney Health Dis 2019).

Even with pre-dialysis care, many patients with kidney failure feel they have not been educated appropriately about home therapies or that they were allowed to make their own choice about treatment modality. (Walker et al Nephrol Dial Transplant 2016) Black and Latinx patients are more likely to use in center hemodialysis units who do not offer home therapies, which makes it more difficult to access quality information, encouragement, and support for home dialysis. One study, for example, showed HD medical directors, when compared with PD medical directors, may have staff with less training or may have less enthusiasm for home therapies; these providers were less likely to recommend home therapies (Shen et al CJASN 2019). This may be in part due to poor education of nephrology providers regarding dialysis modality treatment; despite gains in home dialysis education, home dialysis continues to be noted by nephrology fellows as a leading educational gap. (Rope et al JASN 2017)

Barriers at the System Level

Prior studies have shown a mixed association of lower socioeconomic status (SES) and lower home dialysis use. Insurance arrangements and patient contributions to care are more likely to affect Black and Hispanic patients, especially as these groups are more likely to be uninsured prior to dialysis initiation. In addition, costs associated with time off for training, transportation to training visits, or modifications made from home may represent a financial barrier.

In one study, specific barriers to PD- such as environment and social support were more common amongst patients with lower income and education levels. (Prakash et al CJASN 2013) Shen et al found lower SES attenuated, but did not completely explain, racial disparities in home dialysis use. It is possible lower SES may affect the choice for home therapy- for example, less access to dialysis units that offer home options, inability to complete modality education due to work or family responsibilities, or space/housing issues necessary for home modalities. Notably, in Australia, higher SES is associated with lower PD utilization (Grace et al CJASN 2014), indicating more than socioeconomic status is at play.

Given the many financial and patient-centered benefits of home dialysis, many small investments could have a sizable impact on psychological, financial, and systemic barriers in addressing inequities.

Get the right message out

Reimagine how to deliver home dialysis

Changes in the care delivery model may be helpful for patients with housing and financial issues. Fund-assisted PD (PD at home with the aid of a PD-trained nurse) is currently performed in Canada, Denmark, and France. Fund- assisted PD addresses many issues, including physical barriers, social isolation problems, and lack of family support (Oliver et al CJASN 2020). Further, New Zealand offers community house dialysis programs (independent dialysis in a shared house) for those with unstable housing (Walker et al Kidney Med 2019). Smaller and more frequent supply deliveries may also mitigate space constraints. For those whose dialysis centers do not offer home dialysis, telehealth may ameliorate barriers to home dialysis access (Lew et al AJKD 2021). Financial constraints may be addressed by incentivizing patients or family members choosing the dialyze at home, which may include reimbursement for travel, or allowing for flexible training schedules. 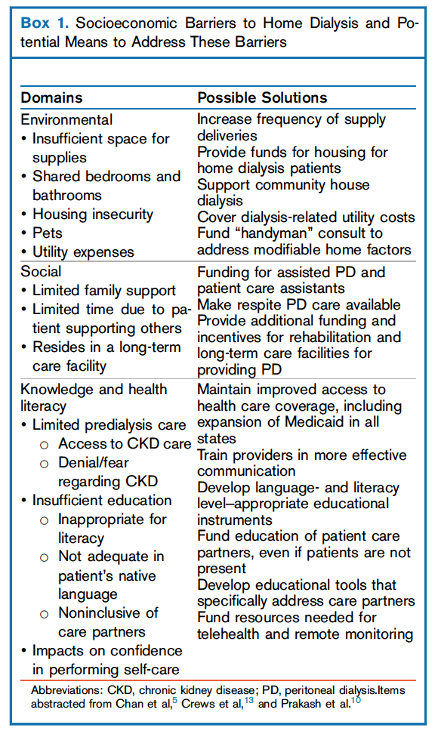 The racial inequities observed in home dialysis use are likely multifactorial due to patient, provider, and policy factors. Mitigating these factors are crucial to providing equitable care in order to meet the goals of the Advancing American Kidney Health executive order.

Reviewed by Matthew A. Sparks and Amy Yau

Putting the Brakes on the Braking Phenomenon in Diuretic Therapy