Hepatorenal syndrome (HRS) was classically recognized as an all-encompassing term referring to the concurrent failure of the kidneys and the liver. Over the years, its conceptual definition has evolved parallel to the elucidation of its pathophysiology.

Currently, we have recognized HRS as a potentially reversible syndrome representing only one hue among the spectrum of acute kidney injury arising from a cirrhotic liver. In fact, among hospitalized patients with cirrhosis, AKI was found in about 19% of the cases. Among the causes of AKI, HRS only accounted for 17% of cases. Other etiologies include bleeding, sepsis, overdiuresis, abdominal compartment syndrome, and glomerulonephritis from hepatitis B or C.

The International Club of Ascites (ICA) updated the diagnostic criteria for AKI in 2015. From this, a set of nomenclature describing the staging and the response to treatment was developed (Table 1). Serum creatinine (sCr) remains as the most practical biomarker of kidney function but its use has significant limitations in liver cirrhosis mainly due to sarcopenia, increased tubular secretion, and increased volume of distribution among others.

The revised AKI criteria adapted by the ICA abandoned the threshold of 1.5 mg/dl and now uses the dynamic changes in sCr instead. Its use has successfully predicted in-hospital mortality in a stage-dependent manner. AKI stage 1 is now divided into 2 subgroups—1A (sCr <1.5) and 1B (sCr ≥1.5) and is consistent with reports showing patients with AKI stage 1B have mortality rates similar to stage 2. Furthermore, urine output as a parameter was removed due to the variability created by confounding factors such as sodium retention and diuretic use.

HRS is a functional syndrome characteristically devoid of parenchymal and structural kidney damage. Thus, urinary biomarkers show promise in distinguishing HRS-AKI from acute tubular necrosis (ATN). The deterioration of kidney function springs from the hemodynamic changes brought about by the cirrhotic liver. An interplay of a multitude of factors contribute to the cascading pathogenesis but the key mechanism involves a marked splanchnic arterial vasodilation triggered by portal hypertension. Consequently, activation of the endogenous vasoconstrictor systems lead to significant kidney hypoperfusion inducing a decrease in glomerular filtration rate (GFR).

Classically, HRS occurs in two distinct patterns— HRS type 1 and type 2. In keeping with the above changes, these patterns are now known as HRS-AKI and HRS-Non-AKI respectively. Aligning with the change in the ICA-AKI criteria, the definition of kidney injury in HRS has been revised and currently utilizes the dynamic changes in sCr as well. Previously, HRS-1 included a time interval of 2 weeks over which the sCr must increase to a value of >2.5 mg/dl. This can lead to delays in the recognition of kidney dysfunction and initiation of treatment. 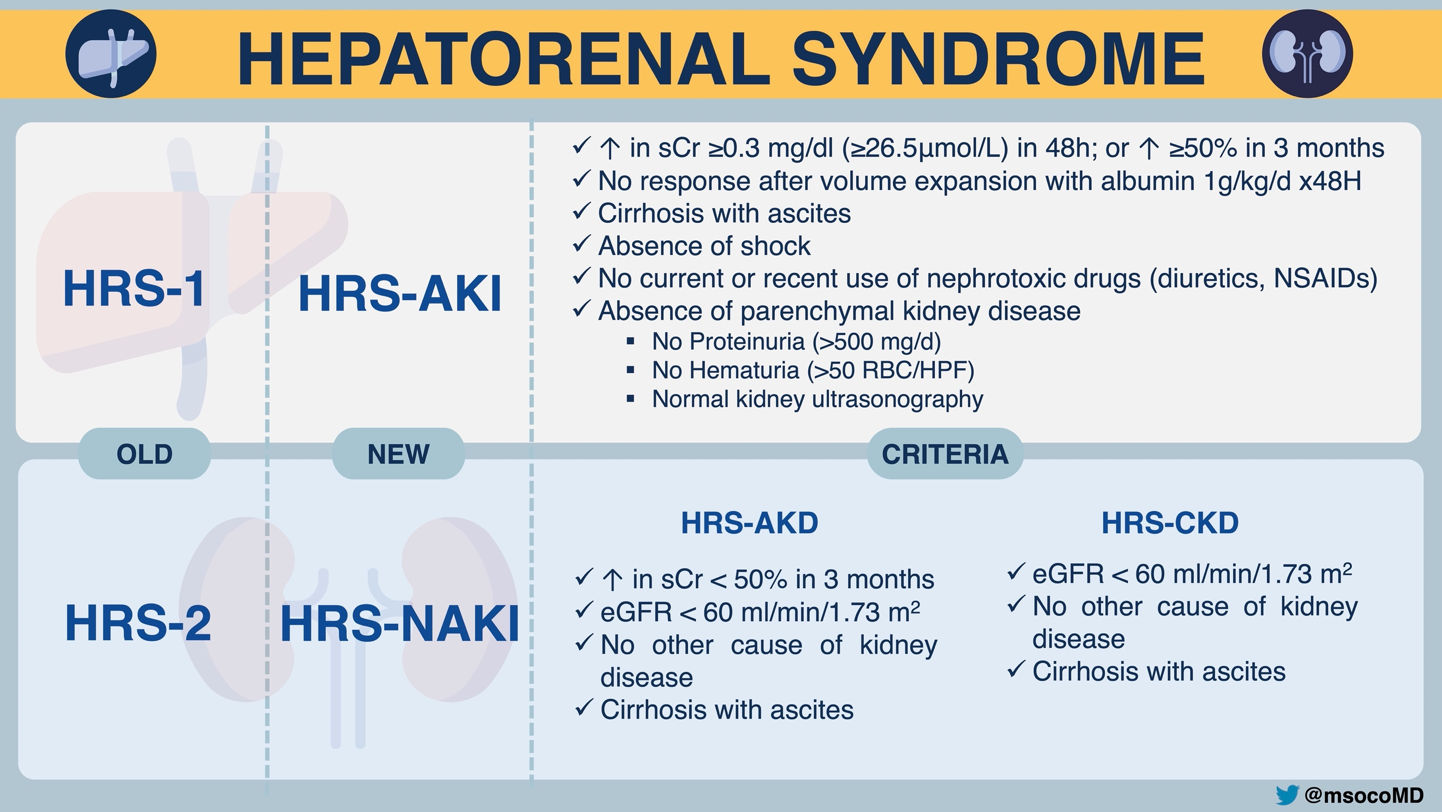 The ICA proposed an algorithm for the management of AKI in cirrhosis based on the new criteria (Figure 1). The fundamental treatment strategy is to mitigate circulatory dysfunction by increasing the effective circulating blood volume with albumin and combining it with systemic vasoconstrictors to counter the pooling in the splanchnic circulation. Among the vasoconstrictors, terlipressin is the most studied. Multiple RCTs displayed homogeneous results compared to placebo. Although it lacked overall survival benefits, it demonstrated reversal of HRS in 24% – 44% and was successful in bridging patients to liver transplant. The recently concluded CONFIRM trial revalidated the efficacy of terlipressin but surprisingly revealed serious adverse events, particularly respiratory failure when compared to placebo. 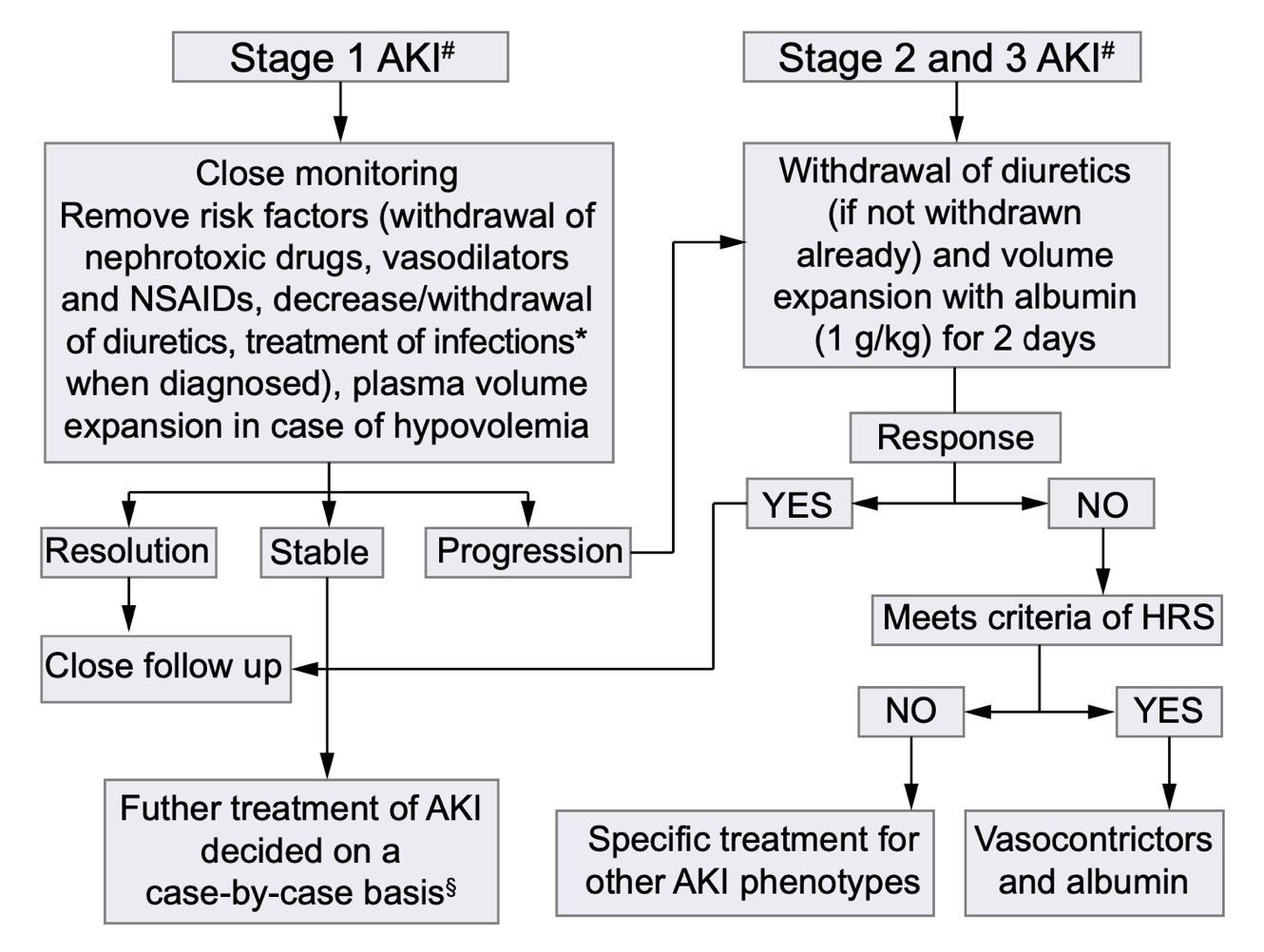 Conventional hemodialysis is used as a short-term bridge to liver transplant. Extracorporeal albumin dialysis, such as MARS, Prometheus, and Single Pass Albumin Dialysis, was also explored as a treatment option. It offers the potential advantage of removing albumin-bound, vasoactive agents, toxins, and proinflammatory cytokines which contribute to splanchnic vasodilation in HRS. Although it was successful at removing albumin-bound molecules, such as bilirubin and at improving hepatic encephalopathy, there is not much data to accept it as standard of care. Liver transplant is the definitive treatment as it corrects the underlying liver dysfunction and portal hypertension that lead to sequential kidney injury. Overall survival is significantly better after transplant. Nevertheless, it is worth mentioning that even after transplant, only 75% of patients regain a normal kidney function. Prolonged dialysis pre-transplant is a predictor of non-reversal possibly due to eventual structural kidney damage sustained from long-standing ischemia. Hence, it has been suggested that in this situation, a simultaneous liver and kidney transplant be considered.

Although more light has been shed on HRS and new algorithms are structured, we still ruminate on the grim nature of the disease. Before we condemn our patients to the diagnosis, we owe it to them to exclude the myriad of causes of AKI in cirrhosis. Diagnosis is a challenge. Treatment is a challenge. As we move forward to new directions, we carry these concepts with the purpose of optimizing patient care until better modalities are available for this vulnerable patient group.

Reviewed by Matthew A. Sparks and Dearbhla Kelly

Haggling with HAGMA: A Common Medication with an Uncommon Differential