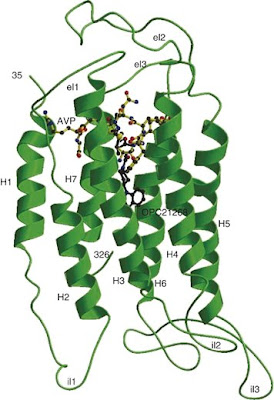 A subset of pediatric patients with a clinical and biochemical profile consistent with SIADH (the syndrome of inappropriate ADH secretion)–that is, euvolemic hyponatremia with an inappropriately elevated urine osmolarity–have low to undetectable levels of ADH. What’s going on?

It turns out that activating mutations in the V2 vasopressin receptor can account for this phenotype. This condition has been termed “NSIAD” for nephrogenic syndrome of inappropriate antidiuresis”, which is not to be confused with our long-standing enemies, the “NSAIDs” (non-steroidal anti-inflammatory drugs, which are themselves a cause of SIADH). In NSIAD, pituitary ADH secretion is appropriately low, but there is high aquaporin activity at the renal collecting ducts based on constitutive V2 receptor activity. Not surprisingly, these patients are resistant to treatment with the new V2 receptor antagonists, the so-called “vaptans” (conivaptan and tolvaptan).

Interestingly the gene is on the X chromosome, which might predict that the disorder should be inherited in an X-linked fashion (e.g, boys only). Due to the gain-of-function nature of this mutation, however, the disease can affect both girls and boys.