Lithium has been a very efficacious drug in the management of bipolar and other mood disorders. There are several aspects of lithium use that Nephrologists need to be mindful of including its pharmacokinetics, its dosing and target concentrations, its propensity to cause renal toxicity and risk factors for same, and when to consider withdrawing the medication. Some of these aspects will be covered in the following discussion.

Lithium is rapidly absorbed in the gastrointestinal tract. Food does not affect its absorption. Peak serum levels are reached within 1-2 hours in immediate release preparations and 4-5 hours in the slow release preparations. Brain levels are reached 2 hours post peak serum level. Lithium is not protein bound and the volume of distribution is 0.8 L/kg body weight and reaches steady state level in 4-5 days in the body. The half life is 24 hours. It is excreted unchanged exclusively through kidneys.

The starting dose of the drug is 300 mg two to three times a day and the target concentration is reached with a dose of 900-1800 mg/day. The recommended level is 0.5-0.8 mmol/L, although for acute manic episodes, it may be higher (0.8-1.2 mmol/L). Twelve-hour serum trough level should be monitored 5-7 days post each dose increase. Volume depletion increases the drug level and increased sodium intake decreases the drug level. Medications which increase lithium levels include NSAIDs , thiazides and lithium itself.

Mechanism of action of lithium in bipolar affective disorder:

It inhibits the action of excitatory neurotransmitters like dopamine and glutamate by counteracting the adenyl cyclase system and IP3-DAG pathway respectively. It also facilitates the effect of GABA at GABA receptors promoting the inhibitory neurotransmission.

The role of Nephrology:

Lithium is known to cause a variety of renal diseases when it is used over a long period generally spanning several years. Kidney disease spectra includes acute lithium toxicity, nephrogenic diabetes insipidus (can occur in up to 40% of users), incomplete distal renal tubular acidosis, nephrotic syndrome (minimal change disease), chronic interstitial nephritis and hyperparathyroidism inducing hypercalcemia. ANZDATA in 2000 has suggested an eight fold increase in the risk of ESKD risk as compared to the general population with a higher risk in women. About 21-55% of long term lithium users have CKD 3 status as per different reports.

Lithium is largely absorbed in the proximal convoluted tubule (PCT) as the drug has similar size and charge as that of the sodium. It is absorbed through paracellular and trans-cellular pathways (NHE1/NHE3 channels) in the PCT but mainly through the paracellular pathway in the loop of Henle with the help of electrical gradient generated by ROMK and NKCC channels in the luminal side and Na+/K+-ATPase and ClC-Kb chloride channels in the basolateral side. In the distal tubule and collecting duct, uptake occurs through a trans-cellular pathway via ENaC channel and rendered into the interstitium by the NHE1 channel.

NDI: After entering the principal cell in the distal convoluted tubule, lithium inhibits glycogen synthase kinase 3 beta (GSK 3β) which regulates cell cycle progression, cell survival and function. Due to the inhibition of GSK 3β, there is a surge in the level of beta catenin leading to cell injury. The other proposed pathomechanism is the increase in the level of prostaglandin 3 caused by lithium, which in turn activates EP3 receptors on the principal cells leading onto reduced AQ2 expression.

Kidney cysts: Formed due to disruption of ciliary function by the inactivity of GSK 3β.

Kidney fibrosis: Occurs due to G2 phase arrest in the cell cycle due to GSK 3β inactivity and increase in the level of TGF beta 2 activity.

Suggested monitoring and titration of the treatment: 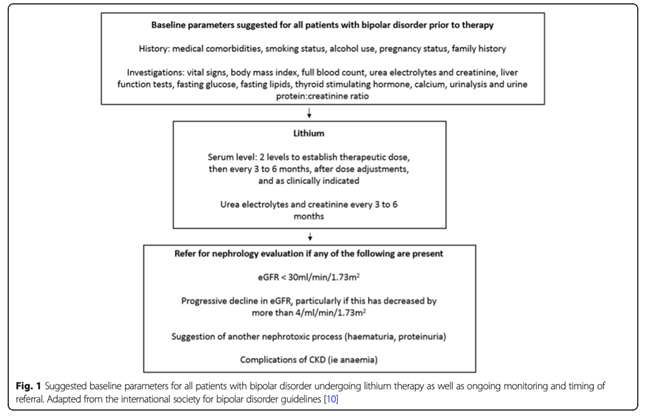 Some propose that discontinuation of the lithium might be helpful when there is a moderate kidney injury with an CrCl of >40 ml/min, although kidney disease may progress even after discontinuation of the drug. Kidney biopsy is not routinely recommended unless there an alternative diagnosis is being considered. MRI may be helpful in detecting the microcytic changes in the kidney.

To read more about Lithium and the kidney, check out the following articles:

How to manage lithium toxicity by Graham Abra

Basics of Doppler Ultrasound for the Nephrologist- Part 2